Needle Phobia Or How I Walked On The Beach With Dracula 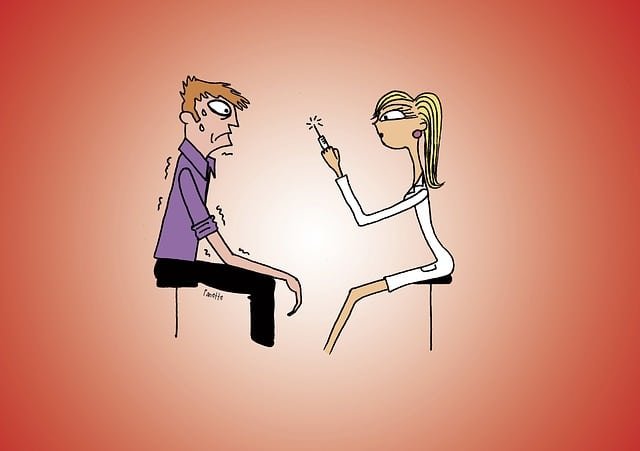 Needles aren’t my best friends. I don’t hate them but I can’t help but tense up a little when I go for a vaccination. Although I don’t suffer from needle phobia or trypanophobia, I had a terrible experience during a blood draw that was interrupted by a walk on the beach with Dracula. (It’ll make sense later). For some people, however, the fear of needles goes deeper than just one bad experience. Fortunately, there are things that can be done.

During the third year of my training as a clinical psychologist, I volunteered at a local hospital. On my first day, I was required to get a physical. Not a big deal but hospitals want to make sure you don’t carry any serious disease, so a blood draw is often required. Easy enough. Just go down to the lab, get stuck, and get out of there.

What Is A Needle Phobia Or Trypanophobia?

I’m not a needle phobic but I can’t be completely calm when the dentist is giving me a shot in the mouth either. A true needle phobia, however, suffers a lot more than just discomfort. Consider Andrew, a man profiled in the Dailymail.com, whose fear of needles is so severe that he avoids going to the doctor after he gashes his head and won’t carry an EpiPen for his bee sting allergy. Other needle phobics avoid checking their blood sugars when they are diabetic or they let infections rage until they become life threatening. The fear of needles isn’t a trivial problem.

Studies (1,2) find that about 10% of the population in the US would meet the criteria for needle phobia. Needle phobia is a type of specific phobia, like a fear of dogs, spiders, bats, airplanes, elevators, and heights. The DSM 5 (the beloved diagnostic guide for mental health problems), describes it as follows:

My Conversation With Dracula

When I got to the lab my first day on the job, the lab technicians sat me in an old vinyl that should have been in a hair salon in the 1950s. The room was crowded and narrow and the door to the hallway was left open, a long line of people waiting impatiently to get in.

The two phlebotomists (the technicians who draw blood) didn’t really care for each other and bickered back and forth. I wanted this to be over as fast as possible. I felt myself getting hot, my chest felt constricted, and it was hard to breathe. Then suddenly I was walking on the beach. Along side me was a man dressed in a black suit, white shirt, flared collar, cape, and pointy teeth. It was Dracula. We were having a thoughtful conversation about something but I don’t remember what.

That was the only time I passed out from a blood draw. What happened was a sudden drop in blood pressure and I was out (called the vasovagal syncope). Fortunately, I never developed a serious fear of needles.

My beach walk was interrupted by a voice calling out to me. “He’s so white. Oh my gosh.” Another voice adamantly disagreed, “He fines!” A white light cleared away the haze. I’m in the lab with two technicians standing over me arguing over how bad I look. They wheeled me away in front of an entire waiting room – and the worst part – no blood draw.

My perspective is that biology is far less important than experience. People learn phobias from their parents and other experiences. If your parents are afraid of needles and complain about how awful doctors visits are, you’re more likely to become afraid of needles. Or seeing television shows as a child with awful portrayals of operations, surgeries, or huge needles is bad as well.

But generally, our first experiences with needles can either set the stage for comfort or fear later in life. Most kids are afraid of shots and for good reason. They hurt (to a small child) and they have little understanding of the reasons to go through that discomfort. If parents don’t provide positive explanations about getting shots and make the experience as tolerable as possible, maybe given them a big treat afterwards, then it sets the stage for later fear. Statements like “It doesn’t hurt that bad” just discounts and amplifies children’s anxieties.

If you’re wondering why I had a dream about Dracula after I passed out, I have no idea. Maybe the thought of losing blood might have something to do with it. But he was quite a nice Dracula. Aside from that one experience, every other lab draw that I’ve had has gone well. (Below I explain why I was lucky enough to never develop a fear of needles, or what is also called blood injury/injection phobia).

If you or your kids have a fear of needles, there is something that can be done. Most kids fear needles so getting help right away for your toddler is premature. But if the problems is growing worse and worse and it’s causing more challenges or it leads you or your kids to avoid getting necessary treatments then you should get help or at the very least learn more about how to cope with it.

One effective treatment is cognitive-behavioral therapy. The idea is to teach the fearful to challenge their negative beliefs about medical procedures, e.g., “I am going to pass right out when I get the shot,” and gradually helping them to confront their fears. Needle phobia, however, is one of the problems where sufferers don’t want to practice relaxation while facing their fears, as is often prescribed for other phobias.

Relaxation can lower blood pressure, increasing the chances of fainting. According to K. Jenkins, a clinical psychologist in practice in a hospital, “One such strategy would be applied tension, where the patient is taught to tense the muscles in their arms, legs, and thorax; hold for ~15 s; and then release some of the tension for ~30 s, without allowing the muscle to completely relax.” This is one of the fears that’s hard to face on your own and since we don’t need medical procedures often, it’s easy to put off.

What Can You Do?

But just remember there’s no shame in being fearful of medical procedures. It will get better with consistent practice and work and there’s no need to go it alone. A mental health professional can often give you the support and guidance that is essential for overcoming your needle phobia.