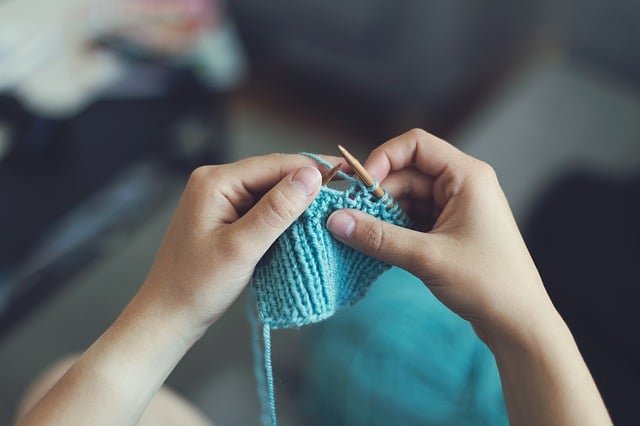 Eighteen percent of Americans suffer from some kind of mental health problem. But instead of reaching for the nearest antidepressants, why not try some of these proven alternative to boost your mood and calm your anxiety.

Clickety-click. Clickety-click. Who amongs us does not remember the grandmother or mother knitting away in front of the television at night, working on socks or jerseys or scarves for winter? Over recent years, knitting has become trendy again with knitting clubs and groups mushrooming in cities across the US.

The Craft Yarn Council recently reported that a third of women between the age of 25 and 35 knit or crochet. Columbia College Psychiatrist Carrie Barron says handiwork, like knitting and crocheting, is a wonderful tool for alleviating anxiety and depression. Her husband, orthopedic surgeon Alton Barron, also believes knitting can prevent arthritis and tendinitis.

Use Your Hands To Relax

A Chicago Tribune article says Dr Alton Barron found that using one’s hands meaningfully activates positive engagement and activity in 60% of the brain. This corresponds with research published in 2013 in the British Journal of Occupational Therapy, which showed that knitting improved the mood of about 3,500 knitters, of whom 81% described themselves as being happier after they started knitting.

The mood enhancing effects of needlework might be more than just a pleasant distraction. According to the relaxation response theory, the brainchild of Harvard Medical School professor Dr. Herbert Benson, meditative activities create a positive physiological state that lowers heart rates and blood pressure, alleviating symptoms associated with hypertension, insomnia, depression and anxiety. Needlework, much like meditation, focuses the mind in a calm but engaged fashion that captures these physiological benefits.

Knitting pattern designer and self-confessed knitting addict Sally-Ann Deetlefs is not surprised to hear of the research. “Knitting makes me happy. I don’t need any academic to tell me that. But it is interesting to know why.” Cameron, a stay-at-home mom of three, says knitting helps her to relax.

A Green Thumb Can Lift Your Mood

Men traditionally used to knit as well but it became less common around the 1800s. While some men are still known to knit, with US acting legend Rock Hudson apparently being fond of crocheting; there are other hobbies men can take up to improve their mental wellbeing – like carpentry, renovation projects and gardening.

A recent survey for Gardeners World revealed that 80% of gardeners said they were happy and satisfied with their lives, compared to 67% of non-gardeners. It also appears that the more time they spend around flowers and shrubs, the happier people are. A total of 87% of people who were in their gardens for more than six hours a week reported feeling happy.

There may be many reasons for this – from the exposure to nature and sunlight, the increase in exercise as well as the focus on a project or job that can be completed and is aesthetically pleasing and practical.

Watch Out For Retirement . . .

This becomes especially important for men in retirement, who often find themselves at a loss when it comes to all the time they suddenly have on their hands.

Studies show that men become particularly at risk for depression after retiring from work. Research in 2013 by the Institute of Economic Affairs found that retirement increases the likelihood of suffering from clinical depression by 40%. The US-based Centers for Disease Control and Prevention also revealed that suicide rates are highest among men of 75 and older.

Clinical psychologist Marnin Heisel is the director of research and associate professor in the department of psychiatry at the University of Western Ontario. He believes when men retire they lose a sense of identity, a social network as well as connection to others, making them especially prone to depression.

Another way to treat milder depression and mental health issues – in both men and women – is through yoga. Originally from India, people in the West often do yoga for its physical benefits, as a form of exercise and to increase suppleness and tone.

But the psychological benefits of yoga are widely known and well documented. A 2013 Massachusetts General Hospital study found that the deep physiological state of rest induced by the three yoga elements of postures, breathing and meditation produced immediate, positive change in immune function, energy metabolism and insulin secretion.

Anesthesiologist Steven J. Saltzman, who is also a practitioner of Bikram yoga himself, says yoga tames the stress response by priming the parasympathetic nervous system (which slows down the fight or flight response and physiological arousal), therefore reducing stress in the mind and body.

He also says it helps to promote mindfulness – in which people stay in the moment and are not distracted by worry and anxiety. Yoga is used in various therapeutic treatments and recommended for cancer patients as a way to reduce stress and is even used to treat PTSD in combat veterans returning from duty in Iraq and Afghanistan.

What yoga, gardening and knitting have in common is the way in which it leads individuals within, towards themselves and away from negative thinking and unhelpful emotions. In other words, it promotes mindfulness.

According to Psychology Today, mindfulness is “a state of active, open attention on the present. When you’re mindful, you observe your thoughts and feelings from a distance, without judging them good or bad. Instead of letting your life pass you by, mindfulness means living in the moment and awakening to experience.”

It does not matter what activity you turn you – knitting, gardening or yoga – it is clear that there are many options for people suffering from mild depression. Many of these are simply lifestyle-related, taking you out of the house and into the sun, getting a good blood flow going and enjoying the simple pleasure of making a jersey for a loved one.

In our extremely stressed and rushed modern lives where we are constantly trying to achieve, perform and impress, there is a big danger of losing connection with the self. Becoming more aware of yourself and how you feel, what really is important to you and will make you happy is crucial knowledge that no human being can be without.

So next time you feel an attack of the blues, why not try yoga or a bit of knitting before heading for the nearest pharmacy.

PrevPreviousWHAT MARSHMALLOWS CAN TEACH YOU ABOUT DELAYING GRATIFICATION
NextWhy Your Panic Isn’t Improving?Next